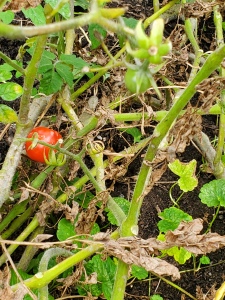 “The life cycles. All other cycles.

That’s what it’s all about, and it’s all forgot.”
—Gary Snyder, from poem For/From Lew (read the whole poem here)

I don’t mind watching the garden die. I never spent much time on it, though that doesn’t mean I didn’t raise it with love. In part, it serves as a reminder to use time wisely—between writing, music, family, and my corporate job, it never hurts to remember how precious the hours are. Plus, I like leaving things a little bit wild anyway. I’m terrible at training pets and not a great disciplinarian with my kids. So while my garden was caringly watered, I let the weeds grow where they may. A lot of the tomatoes will end up being next year’s volunteers, and the beans, too, will have plenty of leftovers for seeds.

I quoted Gary Snyder at the beginning of this post, but I’m also thinking of Kenny Rogers’ cloying lines, “You gotta know when to hold ’em/ Know when to fold ’em/ Know when to walk away/ Know when to run.” Some may think it odd for a horror writer to be quoting hippy poets and slightly wholesome old country singers. But if you take a moment to read the entirety of Gary Snyder’s poem, it’s about the ghost of a friend who shot himself. The things that eat at you can be a Zen poem or even corny as a radio country hit. And while some hippies are like John Lennon, others are like Charles Manson (don’t take that as autobiographical, for one thing, I have no plans of getting a swastika tattooed to my forehead).

So watching a garden die is as fun and funny as watching it grow. The seasons inflict murder every year, and there is nothing anyone can do about it. Weirdly, cycles, timing, and relinquishing some control can have their place in achieving one’s goals.

But that isn’t an excuse to be lazy either. Over the past decade, I’ve been spending an increasing amount of time in the woods, and yet I’ve found myself writing a lot about the city, especially about Brooklyn. It’s like cheating on my own brain—spending summers with copious amounts of bonfires, guitar playing, hiking, and even some fishing, delving deeper into the life of upstate New York and taking long road trips to Maine—only to flick a switch once a day and work on a horror novel taking place in New York City. It’s like I’ve been carrying the city around in my head, feeding a gestating monster, a seductive and hideous place full of hunger and decay. This beautiful and aberrant creature is my own precious thing which I am nursing and nurturing and bringing to fruition.

Sometimes folks throw the word ‘eclectic’ my way, but that’s not how I feel. I don’t see writing about the woods and writing about the city as being mutually exclusive. They have in common that they are wild places, and easily haunted. Chains in the Sky is ripe now and ready for harvest—I neither rushed it, nor neglected it, and maybe that’s why it survived. I’ll see how it tastes, and afterward, I’ll raise the next crop.

But first I’ll let the seeds scatter and see what volunteers, and if it’s something unexpected, we’ll let it grow a while and see what happens.

Carl R. Moore is the author of Slash of Crimson and Other Tales, and the forthcoming Chains in the Sky, with Seventh Star Press

2 responses to “ON GHOSTS, GARDENS, GARY SNYDER, AND THE BOUNTY OF DECAY”