I’m very excited to be reviving the Crimes of Heaven and Hell blog. I hope to have some exciting new prospects for the series in 2014, as well as continuing book reviews, interviews, and essays on all things literary and frightening. I have sometimes been pleasantly accused of being an ‘all business’ kind of guy, so in keeping with what I took as a compliment, let’s go straight to our review of Allison Dickson’s Strings and conversation with the author. Heave oars for the starlit abyss!

With Strings, Allison Dickson’s makes a strong debut in the mixed genres of horror and crime noir. The novel tells the tale of Nina Quick, a beautiful, young Midwestern girl sucked into New York City’s maelstrom of money, drugs, and organized crime. At the outset, Nina finds herself working in the “oldest profession”, as it were, turning tricks to pay off a debt to mafia boss Victor Cassini. And yet from the moment Nina enters the ramshackle gothic mansion of an eccentric billionaire to turn her last trick, the novel transforms into a kinetic combination of genres that offers the reader a smorgasbord of action, tension, and suspense, all painted against a background of the tastefully grotesque.

The tale’s strength lies as much in the subtlety of its character development as its sumptuous excesses of horrific imagery. Written in the third person, from multiple points of view, Dickson’s tale weaves an elaborate knot of identities, emotions and diverse souls, all converging on the tragedy incited by Nina’s fate in the Ballas mansion. She places her characters in environs with a detailed sense of setting—the interior of a Brooklyn brothel, a cavernous country Victorian house, and a high-meets-low-roller version of Atlantic City. Agile use of pathetic fallacy and stream of consciousness devices allow her to delve deeply into each character’s background without slowing the story’s pace.

Perhaps the most intriguing aspect of the story exists in its unity of theme—the strings of obligation that hold families together, the strings that hold people literally and figuratively prisoner to bad contracts and bad decisions, and—with hopes to not edge too near a spoiler—the ropes put to use by a rather original villain.

I recommend Strings to any horror fan who loves classic tropes with original twists, and to the reader of realism open to emotional intensity, over the top imagery a la Hieronymus Bosch, and a taste for the irony that often what holds human beings together can also, as it were, pull them apart.

This installment of the Crimes of Heaven and Hell blog features an interview with Allison Dickson. Keep reading to find out more about Strings, thoughts on the horror genre generally, and the beauty of stilettos and derringers.

What first attracted you to the horror genre?

It’s funny, because I had an early attraction to the genre, but I also dreaded it. It was never fun for me, and actually it still isn’t. I remember watching horror movies when I was seven or eight years old, and they traumatized me. A well-made horror movie even to this day will fill me with a lot of anguish, and I will often be glad when it’s over. And yet, still, I’m always poking the things that live in the dark, tempting them to bite me. I don’t know why this is, though I’m wagering a pretty bloodthirsty creature lives in my subconscious. I remember scaring very easily overall as a kid, though, and I was incredibly gullible or at least willing to believe the worst that could happen. I’m not so much that way anymore. Over the years I learned to channel my fears into words, but the monsters and secrets that live in people, behind all the pretense, still fascinate me.

Do you distinguish horror significantly from other dark genres, such as science fiction and dark fantasy?

This is such a hard question for me, because I like inserting feelings of dread into everything I write, regardless of whether it’s sci-fi or mainstream, and I think that lingering dread or mounting terror is really the hallmark of horror. What ultimately sets horror apart from other dark genres, though, is whether that’s the primary aim of the story. You can put darkness into your sci-fi and fantasy, but they are still first and foremost sci-fi and fantasy stories that might be using horror devices here and there to build suspense. A horror story’s main aim is to horrify, and that element is carried throughout the story and it typically will not have a happy ending. At best, it will be bittersweet. The horror will linger with you. I first wanted to market Strings as primarily a psychological thriller, but that just wasn’t going to happen with all the “Junior” business between the pages. It’s a horror story with elements of crime and suspense, and I think it’s important to let people know that upfront so they can be ready for it.

Who do you consider to be your influences?

Stephen King is probably my main master, but I have to say his son Joe Hill is really up there for me as well. Just finished his short collection, 20th Century Ghosts, and I haven’t been in such admiration of a collection since King’s Everything’s Eventual. But a lot of other authors have lent me a boatload of inspiration over the years. Cormac McCarthy, Margaret Atwood, Gillian Flynn, Robert Heinlein, and Neil Gaiman very big favorites.

Were there any ‘real life’ inspirations for the characters in Strings?

All of the characters are amalgamations of people I have known over the years. With Nina I wanted to explore this thing I’ve noticed with a lot of women my age who never really grasped their true identities, thanks to being raised by overpowering parental figures who never let them have a voice. They kind of grow into these hollow cores roaming around in search of something, taking on the hue and temperature of whatever is influencing them most at the moment. Maybe it’s because they’re afraid to really look at what’s living inside them. In Nina’s case, there is a darkness living in her that I think she will eventually start to confront, for better or worse. With Madam and Ramon, it’s more an exploration of the other side of the coin, how people who do know themselves, perhaps too well, wind up embedding in these deep ruts. Once you reach a certain age, especially after you’ve done so many horrible things, can you release yourself form the bonds of your past?

What went into choosing the settings and locales for this story?

The New York setting was born namely out of a desire to have a country girl run away from home to the most glamorous place she could think of, and that had to be NYC. It’s just a beacon for a lot of desperate people looking for escape, and I think such beacons are often mirages. Atlantic City wasn’t originally part of my plan, but I have a fascination with places that are built specifically around human avarice and Las Vegas was too far away to be practical for this story, so AC it was.

The story features some classic weapons with an original flair. You don’t happen to collect vintage derringers or stilettos that double as jewelry?

I wish! I love the idea of a tiny, concealable weapon, because they add an element of unpredictability to a person, which feels necessary in a story like this for some reason. The Madam’s hairpins are probably my favorite thing ever, and one day I would love to have a set of them custom made to look how I envision them in the book. Not that I would plan to use them, of course . . .

With one novel published, what’s next for you?

The next big release is a complete 180 from this one. It’s a dystopian sci-fi about an agricultural-based apocalypse, complete with little psychic kids and shape-shifting locust swarms. It’s called The Last Supper, and Hobbes End Publishing is releasing it later this summer. But I actually do have a sequel to Strings in the works and hope to finish that one very soon. 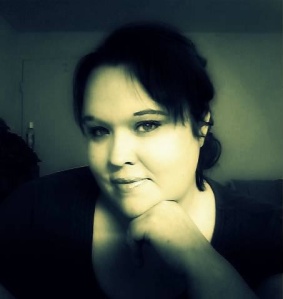