Happy holidays, everyone—I’ve been meaning to post my year-in-review blog entry for some time now, but life has been interfering as it is wont to do. My daughter was in an accident at school last week and broke her arm severely. She will recover, and with any luck pretty rapidly, as she is six, but it was still a lot to deal with. In addition to that, we’ve had several winter maladies come through our house, and our rickety, bat-infested old Tudor revival has itself had some maladies. On top of that, my sister-in-law has been battling a serious illness with great courage. Her prognosis is good, though she still has a way to go, and our family has made every effort to help her with this as much as we can. And so, it has been no autumn for the faint-hearted.

But—I must say—2012 has been a pretty good year for me writing-wise. I’ll review here some steps forward that I’ve been able celebrate:

Foremest is the release of Slash of Crimson back in June. Small press Rymfire Books did a great job, all thanks going to Armand Rosamilia (author of The Russian Zombie Gun). It’s gotten good reviews, and sold moderately well for a small press release. Nothing makes an author happier than when he or she hears someone genuinely enjoyed their book. There were a few nits/errors that I didn’t manage to extract from the manuscript, but the fault for those lies not in the stars but in my own oversight. Still, overall it felt like a good first release, and I invite anyone who likes Lovecraftian horror with a dash of the darker side of urban fantasy to check out a copy: 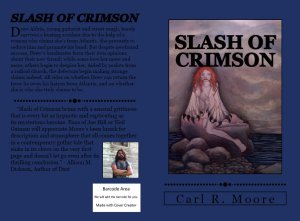 Another piece of good news came in the form of the acceptance of my short story “Marzly’s Market” for Angelic Knight Press‘s “No Place Like Home—Tales of a Fractured Future“. The story will be in good company, appearing alongside works by Gene O’Neill, Bryan Hall, and Lisamarie Lamb. The release date has been delayed from November of this year to January/February of next, but hey, what’s a Valentine’s Day without a dash of post-apocalyptic dystopian fiction? Thanks again to Stacey Turner, Blaze McRob and everybody at AKP for putting this anthology together:

I would also like to mention a short story that will be included in an anthology published by Dan O’Brien. Dan is a horror author and blogtalk radio host who interviewed me back on July 13th (Friday the 13th, no less). We had a great time talking about contrasting urban landscapes as settings for horror novels, New England architecture, H.P. Lovecraft and even some of his own prolific ways. Check out some of his work here. Back in November, Dan invited me to submit a story for an anthology he is editing. The title of the anthology and release date are forthcoming, but very soon I shall have the specifics for this publication announced as well.

Last but not least, I blurbed my first book in 2012, fellow Rymfire author Brent Abell‘s In Memoriam.

So thanks to all friends and readers for making 2012 a fantastic year. There is more Heaven and Hell to come, let’s brace ourselves for an exciting ride in 2013!