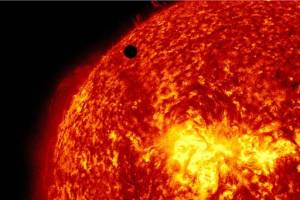 So Venus passed in front of the sun. It made me recall what might be one of my favorite Stephen King stories of all time titled I Am The Doorway.  A tale a touch Lovecraftian yet with King’s sense of realism in the prose. It also featured the planet Venus (though it wasn’t quite in the foreground in the story, it cast an ominous shadow over the entire narrative). I read this when I was about nine years old (way too young for it), got pretty freaked out and have been re-reading it now and again ever since.

This also got me thinking that though Mars seems to figure more frequently in science-fiction, horror and fantasy, I personally have always had an interest in the planet that travels between the Earth and the sun. For one thing, Earth and Venus are about the same size, which makes the second planet kind of a warped twin of the third. Something about that and the fact that it is overheated and hell-like serves to feed the dark side of imagination. And if it’s named after a love goddess, that only adds to its sadistic allure.

So I wonder if anyone else has any recommendations on good Venus stories? Has there been an anthology of Venus stories? Would be interested in people’s thoughts.

On another note, something else I should mention is that soon this blog will be featuring some guest bloggers: Armand Rosamilia, writer and editor for Rymfire Books which just published my novella Slash of Crimson will be making a guest appearance, as will Dan O’Brien, author, editor and radio host. Updates soon on when these events will be happening.